Does the human placenta delivered at term have a microbiota? Results of cultivation, quantitative real-time PCR, 16S rRNA gene sequencing, and metagenomics

The human placenta has traditionally been viewed as sterile and microbial invasion of this organ has been associated with adverse pregnancy outcomes. However, recent studies utilizing DNA sequencing techniques have reported that the human placenta at term contains a unique microbiota. Yet, when working with low microbial biomass samples, DNA sequencing carries the inherent risk of capturing background-contaminating DNA, and most of these recent studies have not accounted for such contaminants.

PRB researchers investigated whether the human placenta delivered at term in patients without labor who undergo cesarean delivery harbors a unique resident microbiota. Specifically, bacterial profiles of placental tissues and background technical controls were characterized and compared using bacterial culture, quantitative real-time PCR, 16S rRNA gene sequencing and metagenomic sequencing. The vast majority of placental tissues (28/29) were negative for bacterial culture. The few bacteria that were obtained through culture from one placental sample were likely contaminants because their corresponding 16S rRNA genes were not detected in the same placental sample. Using quantitative real-time PCR and sequencing of the 16S rRNA gene, a consistently significant difference in bacterial abundance and/or profile could not be found between placental tissues and background technical controls. Metagenomic sequencing of placental tissues yielded bacterial DNA primarily from cyanobacteria, aquatic bacteria, and obligate plant pathogens; these microbes are unlikely to populate the human placenta. Therefore, using multiple modes of microbiologic inquiry, a resident microbiota could not be identified in human placentas delivered at term from women without labor.

PRB researchers thus propose the following criteria for establishing the presence of a resident microbiota in low microbial biomass sites such as the placenta:

(2) Confirmation of microbial burden of tissues or fluids through quantitative real-time PCR.

(3) Demonstration of the viability of the microorganisms detected in tissues or fluids, either through culture or the transcription of specific microbial genes.

(4) Visualization of the microorganisms in tissues or fluids through microscopic techniques, such as fluorescence in situ hybridization with eubacterial or, ideally, species-specific microbial probes.

(5) Residency of the microorganisms in the tissues or fluids is ecologically plausible in that they are likely to survive in the niche in which they have been found. 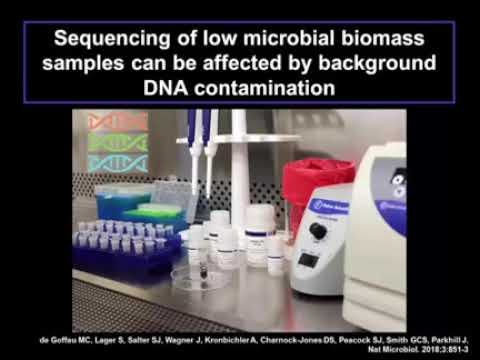