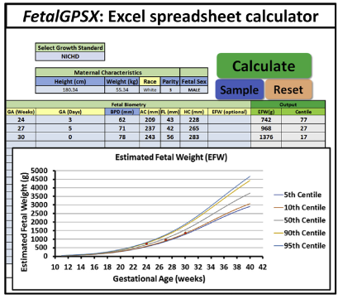 Over the years, several fetal growth standards were proposed, based on either fetal or neonatal data, and they include 1) one-size-fits-all; 2) customized by race/ethnic group and other maternal and fetal characteristics; and 3) fetus specific (individualized). Achieving consensus about which standard is more suitable for clinical use requires evaluation of the predictive performance of available fetal growth standards with respect to clinically relevant outcomes. However, such comparisons are hindered by lack of a simple software tool that implements most of the growth standards in use.