Prediction of early preeclampsia: results from a longitudinal proteomics study 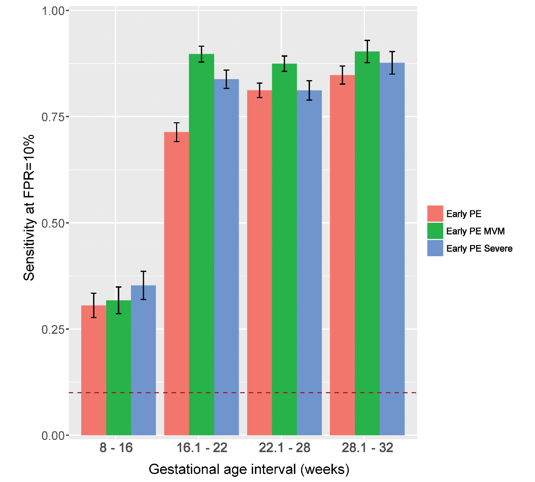 Preeclampsia is a major obstetrical syndrome and is classified as early if it occurs prior to 34 weeks of gestation. Current prediction models for preeclampsia combine maternal risk factors, uterine artery Doppler velocimetry, and maternal blood proteins. Although the detection rate of such models to identify patients at risk for early/preterm preeclampsia is sufficient to allow preventive strategies, the contribution of biochemical markers in these models is limited.

Therefore, the PRB researchers utilized a novel high-affinity aptamer-based proteomic platform to identify longitudinal changes in maternal plasma proteins that have the potential to improve prediction of early preeclampsia and to distinguish between the early and late phenotypes. The team also investigated whether the predictive performance of protein markers is impacted by disease severity and the presence of placental lesions consistent with maternal vascular malperfusion among cases. Aptamer-based proteomic profiling of maternal plasma identified novel and previously known markers for preeclampsia. At 16.1-22 weeks of gestation, more than two-thirds of patients who subsequently develop early preeclampsia can be identified by an elevated MMP-7 and gpIIbIIIa in maternal plasma (10% false-positive rate). High abundance of siglec-6, VEGF121, and activin-A observed in the maternal circulation at 22.1-28 weeks of gestation was more specific to early, rather than late preeclampsia. Proteomic markers were more sensitive for early preeclampsia cases with placental lesions consistent with maternal vascular malperfusion, as well as those with a severe phenotype.