Our major emphasis in imaging is three-fold. First, we have developed a rapid neuroimaging protocol to study oxygen saturation in the fetal brain and susceptibility weighted imaging of the fetal brain. Second, we are evaluating the entire vascular system of the placenta from the mother’s side to the fetus via the umbilical cord. Third, we are developing other novel imaging methods to study the fetus and fetal brain.

Our goal is to create 3D images mapping the iliac, uterine, arcuate,  radial and spiral arteries on the mother’s side to the stem, chorionic and umbilical vessels on the fetal side. We plan to study vascular function by examining both flow and oxygenation levels in the maternal, placental, umbilical, and fetal vessels to evaluate fetal development and to assess intrauterine growth restriction. We display below some of this work in reverse chronological order.

2) Mapping the Vasculature of the Placenta

In this study, we evaluated fetal liver T2* values in prenatal MRI with 3T. T2* can be used as a noninvasive means to study fetal liver iron content. This data could provide a quantitative standard reference value for the assessment of chronic fetal liver conditions. The experiments were performed on 8 singleton pregnant women without chronic disease. No significant variation between gestational ages was found.

5) Mapping the Vasculature of the Fetus

This study reports the feasibility of using an appropriately modified clinical time-of-flight MRI sequence for non-contrast angiography of the human fetal vessels at 3.0 T. 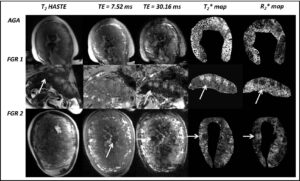 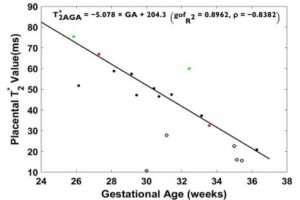 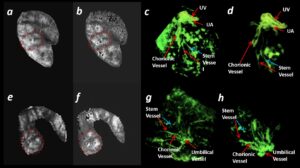 Figure 4
A collage of multiple slices (as numbered) showing the susceptibility maps of a fetal brain. Major vessels such as the SSS (yellow arrow), straight sinus (green arrow), and transverse sinus (blue arrow) can be seen along with the small veins near the corpus colossum. GA: 29 weeks. 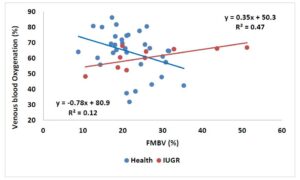 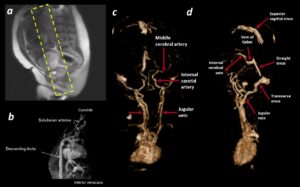