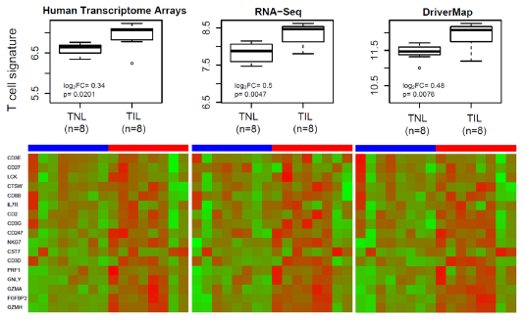 DriverMap™ identified twice as many significant genes (q<0.1) than RNA-Seq and five times more than microarrays. The gap in the number of significant genes remained when testing only protein-coding genes detected by all platforms. qRT-PCR validation statistics (positive predictive value and area under the curve) were high and similar among platforms; yet dynamic ranges were higher for sequencing-based platforms than microarrays. DriverMap™ provided the strongest evidence for the association of B-cell and T-cell gene signatures with gestational age, while T-cell expression was increased with spontaneous labor at term according to all three platforms.

The team concluded that sequencing-based techniques are more suitable to quantify whole-blood gene expression compared to microarrays, as they have an expanded dynamic range and identify more true positives. Targeted expression profiling achieved higher coverage of protein-coding genes with fewer total sequenced reads, and it is especially suited to track cell type-specific signatures discovered in the placenta. The T-cell gene expression signature was increased in women who underwent spontaneous labor at term, mimicking immunological processes at the maternal-fetal interface and placenta.